In 1979, Philip Zieve, chairman of the Department of Medicine at Baltimore City Hospitals (BCH), asked Randy Barker to found a Division of General Internal Medicine (GIM) at the hospital. The Division’s founding responded to growing awareness, locally and nationally, that primary care should be addressed by educational and research initiatives. In 1970, The Carnegie-Commonwealth Clinical Scholars Program had selected BCH and the JHU School of Public Health as the locus for one of its first programs, programs dedicated to creative work in primary by fellow-level trainee-scholars. This program evolved into the Robert Wood Johnson (RWJ) Clinical Scholars Program. 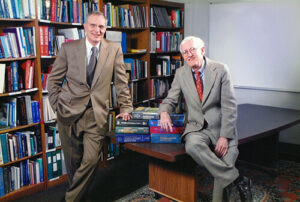 In 1979, Dave Kern joined the faculty in the division. Both Randy and Dave had served as Chief Residents at BCH and as RWJ Clinical Scholars. Randy was Director of the division from 1979-86, Dave and Randy Co-Directors from 1986-2005, and Dave Director from 2005-2011. Together with colleagues they developed the division’s focus on educational programs and scholarship in medical education, which has continued as its core mission for over forty years.

With funding from the Health Services and Resources and Services Administration (HRSA), the division established: in 1978 one of the first HRSA-supported GIM residency programs; in 1987 a faculty development program focused on teaching skills and curriculum development in medical education; and in 1988 a medical education fellowship. All programs are still in existence, and have trained many clinical and educational leaders in Johns Hopkins Medicine and elsewhere, both in GIM and other specialties. The division’s reach has extended beyond JH through leadership in national and international organizations and publications, including numerous journal articles and two foundational text books (Principles of Ambulatory Medicine, 7 editions from 1982-2007, and Curriculum Development for Medical Education: A Six-Step Approach since 1998, entering its 4 edition).

Scott Wright, a graduate of the medical education fellowship, became the division’s 3rd director in 2011.